When the algebra skills of our children are better than only Portugal, Brazil, and Mozambique, you know there are serious long term consequences. 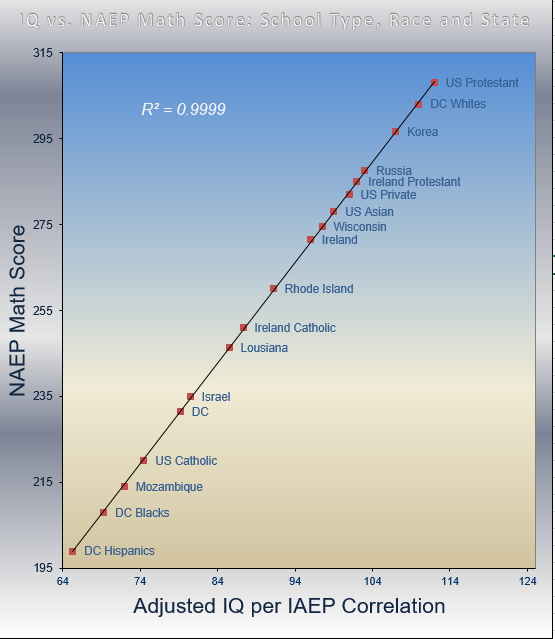 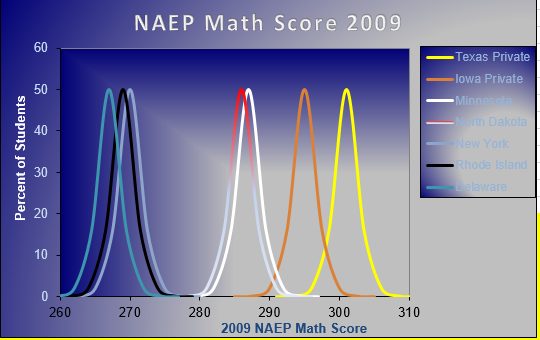 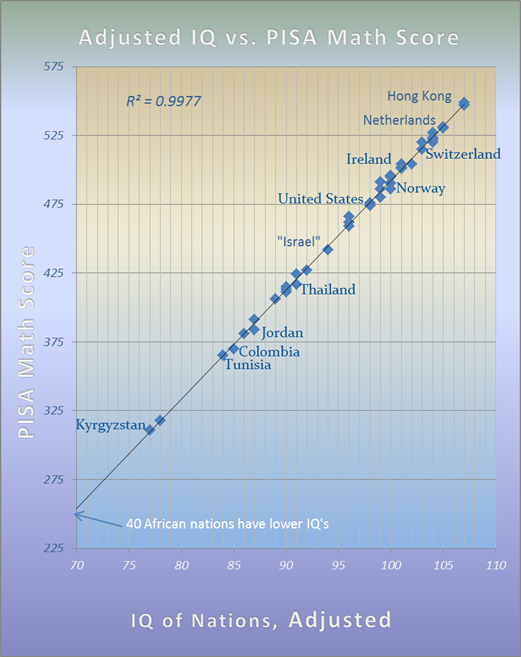 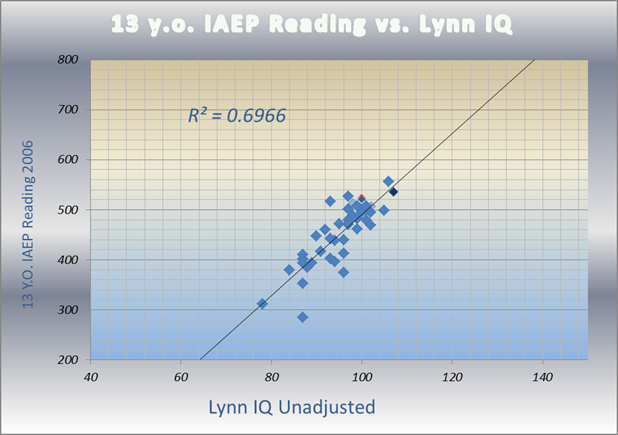 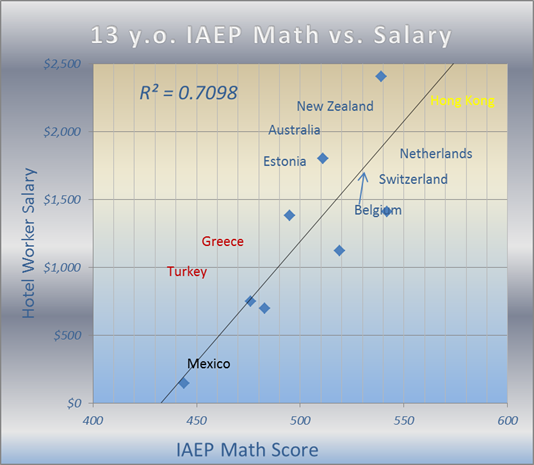 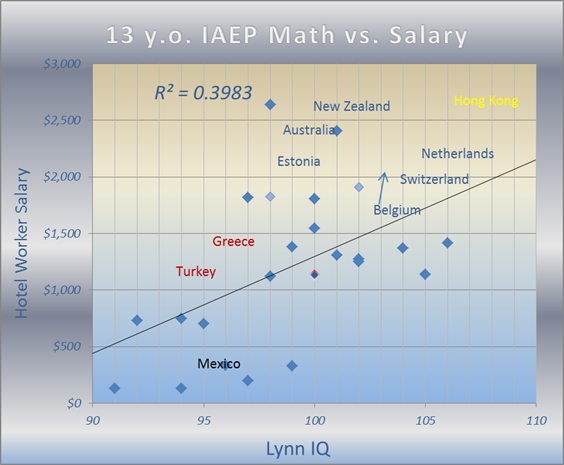 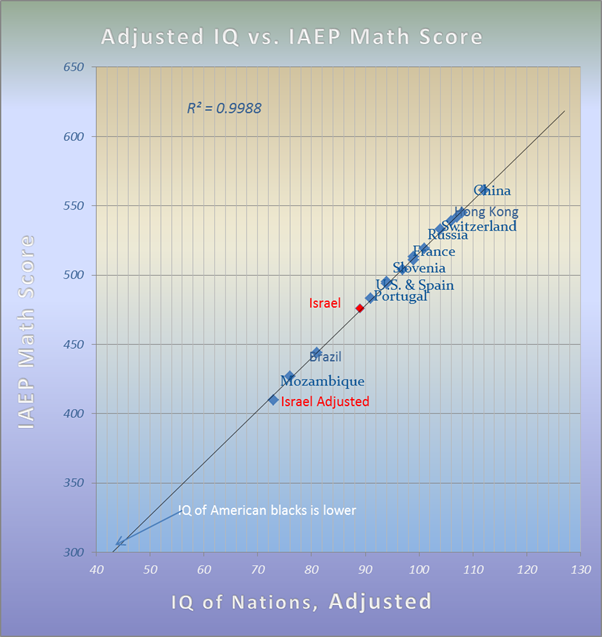 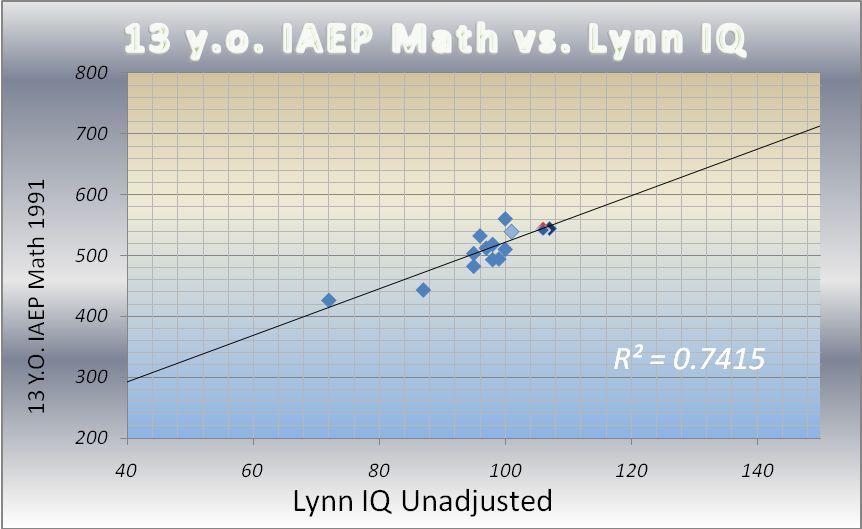 Mozambique participated in IAEP and got 28.3% correct, compared to 80.2% in China, 55.3% in the US, and 73.4% in Korea. The recent breakdown of scores by race in the US by TIMSS suggests the following to be the racial component of our score of 55.3:


"The grand total of DC public school funding for 2007-08 is thus $1.216 billion. Divide that by the OSSE’s official enrollment figure of 49,422 students, and you arrive at an estimated total per pupil spending figure of $24,606."
http://www.cato-at-liberty.org/the-real-cost-of-public-schools/

What does MOzambique do right for Blacks that DC does wrong for Blacks?

The objectivity and amazing integrity of international studies like IAEP, TIMSS, and PISA can be completely undermined with the use of scaled scores in the hands of educrats with an agenda, as the following table illustrates.  In 1991, 80.2 of Chinese 13 year olds, 55.3% of ours, and 28.3% of Mzambique's correctly answered the IAEP math problems and received scaled scores of 561, 494, and 427 respectively:

What these scaled scores conceal is that IF these were all four part multiple choice questions, then just guessing at the answers would yield 25% correct.  So an IAEP score of 427 in a student body in which only 28.3% answered correctly is very close to zero intelligence and math ability.  In addition, numerous known test taking strategies could increase the percent correct to 30%, or even more, when guessing at questions to which you know that you don't  know the answer. 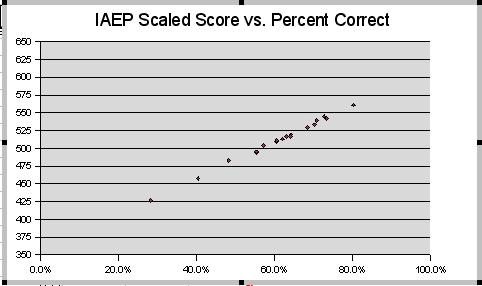 The lowest one percentile of students in China, Switzerland, Quebec, and Saskatchewan scored considerably higher than the average Mozambique student.  But half of the 95th percentile of Mozambique students correctly answered the questions, suggesting the 4% who're Portuguese (and whose genetic brethren back in Portugal answered 48.3% of the questions correctly and had an IAEP score of 483) and the 2% who're Indians who score slightly higher, at 490), also took this test.  This would mean that the IAEP scores of the indigenous niggers was lower  than 427:

The fact that so many of their cousins in neighboring South Africa scored lower than if they'd just guessed on so many similar math problems gives validity to the report that the lowest one percentile of Mozambique's students answered only 11.5% of the questions correctly.  Where the use of scaled scores makes it appear that the comparison between China and Mozambique is 561 vs 427, the actual comparison is 80.2% correct versus 0.0% correct.  Where the standard deviation of Mozambique in general is 18, the actual standard deviation of the native population is zero, as their actual performance on the test is less than zero.

Such a racist, invidious, misleading use of scaled scores is unfair both to students who performed well and the students whose complete lack of math skills has been concealed and ignored.

The SAT Math Equivalent (SATME) Based on NAEP:IAEP Crosslink Study

Table S23 Mathematics proficiency scores for 13-year-olds in countries and public school 8th-grade students in states, calculated using the equi-percentile linking method, according to Beaton and Gonzales, by country (1991) and state (1990) provides the opportunity to create an "SAT Math Equivalent" (SATME) to grade each country based on 12th grade SAT Math score of each state.  The IAEP:NAEP curve has a linear correlation with actual NAEP scores of public schools by state of r-squared = 0.9363, which provides confidence in the accuracy of this correlation.  But when compared to the NAEP scores of non-public schools by state, r-squared decreases to 0.6583, which raises questions about how accurate the IAEP:NAEP will be with other countries; or with a grade level which represents an age difference of 4-5 years; or with 12th grade TIMSS scores by country; or with the percent of correct answers by country on the TIMSS test subjects for which scores are available.

Based on this, it would be expected that the NAEP which tests 13 year olds and SAT Math for 12th graders would not show very high correlation, but r-squared with 12th grade SAT Math scores by state is a surprising 0.8483.  This demonstrates that *within* the US there is a high consistency between states between these two grade levels.  In other words, there is little change in state ranking from 8th to 12th grade in NAEP scores.  The SATME is created from a linear extrapolation of the IAEP:NAEP data and assigns an SAT Math score to each country which is linearly proportional to its IAEP score.  Taiwan, the highest scoring "state" with an IAEP score of 296.7, is assigned an SATME of 555, and Jordan, the lowest scoring "state" with an IAEP of 236.1, is assigned an SATME of 445.  R-squared for SATME and 8th grade TIMSS Math scores by country shows the same low correlation which non-public schools show, or 0.5287.  But r-squared between the TIMSS Geometry scores of the 16 countries whose 12th graders participated in TIMSS and their SATME grade is 0.8128, which is equivalent correlation to IAEP:NAEP to TIMSS Geometry (0.8483).  This is evidence that SATME is an accurate way to grade the average math skills of students in each participating country.

The average r-squared for the 7 math items which show the highest degree of correlation is 0.6675.  You can see from the graphs that SATME predicts the percent of a country's students who can correctly answer Geometry Item J11 to within plus or minus 6.4%, and for Probability & Statistics Item I05 to plus or minus 10%, which is sufficient accuracy for a correlation to SAT Math.  The SATME grade crosses zero percent correct at an average of 404 points, and it crosses 20% correct at 437 points.  If half of these questions were five-answer multiple choice question, and if half of them require a direct answer, then a student who just guessed at these math questions would receive an SATME grade of 420 points.  In other words, these TIMSS questions show that an SAT Math score of 420 is equivalent to zero math knowledge.  Each 1% increase in the percent of correct answers raises the SATME grade by an average of 3 points, so the upper limit of the SATME grade at 100% correct is 720 points: