"We'll know our disinformation program is complete when everything the public believes is false".  --

The late, arguably suicided, William Casey, Director of Central Intelligence's 1st address to his staff in 1981

What would you guess would be the gap in SD between U.S. girls, and Norway boys? [note that the average Canadian boy scored 18 points higher than our top of the line NSF boys] 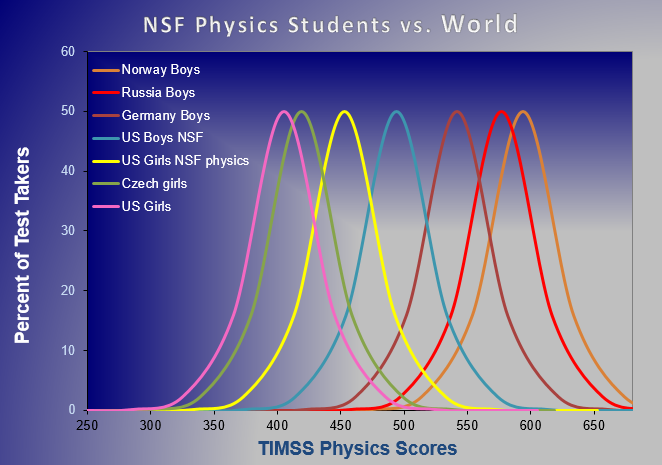 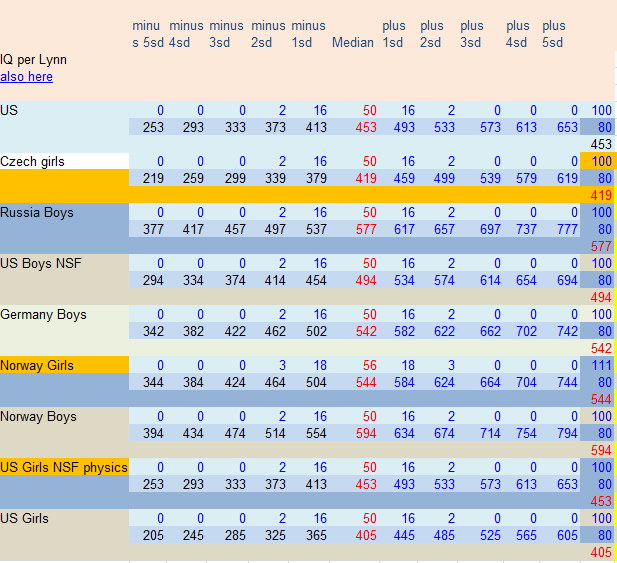 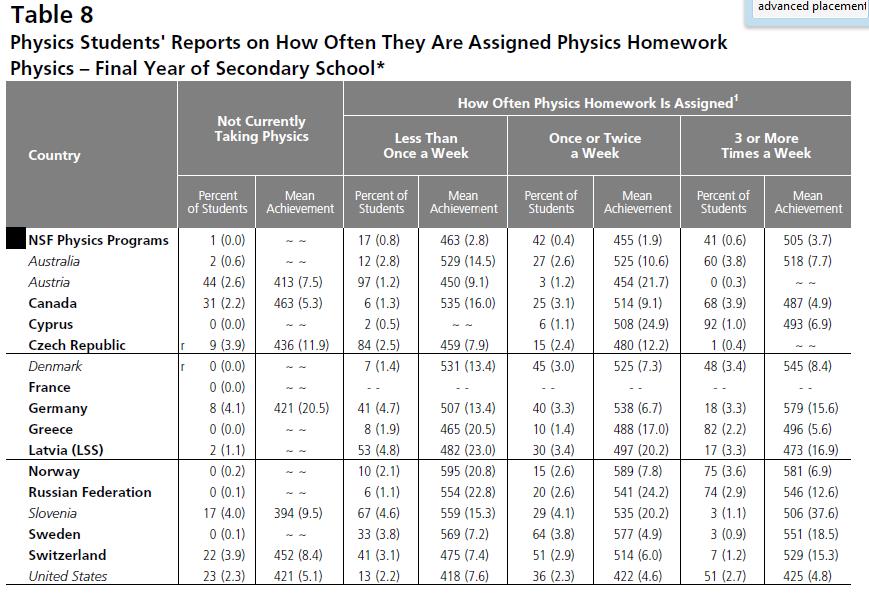 A search of the NSF web site for the report "TIMSS Physics Achievement Comparison Study", a study which THEY funded, produces zero results.  Not even the  National Center for Education Statistics at the Department of Education web site, which hosts innumerable studies praising itself, contains a single reference to this study.  A Google search produces only ONE copy of this study, so the following two web sites have now had this study posted for time immemorial:

Once you understand just how unbelievably poorly NSF students do in the physics achievement portion of this study you will know why it has been disappeared.

By what process could our education system, between 8th and 12th grade, reduce math skills of the average American boy by 58 points and of girls by 104 points while performance of boys in Norway *increased* 82 points and of girls in Norway by 22 points.  This 186 point swing in the difference in math skills between Norwegian boys and American girls represents two or three standard deviations, on top of the 8 point difference which already existed at the 8th grade level.

The Original NSF Standard Grant which funded this study. 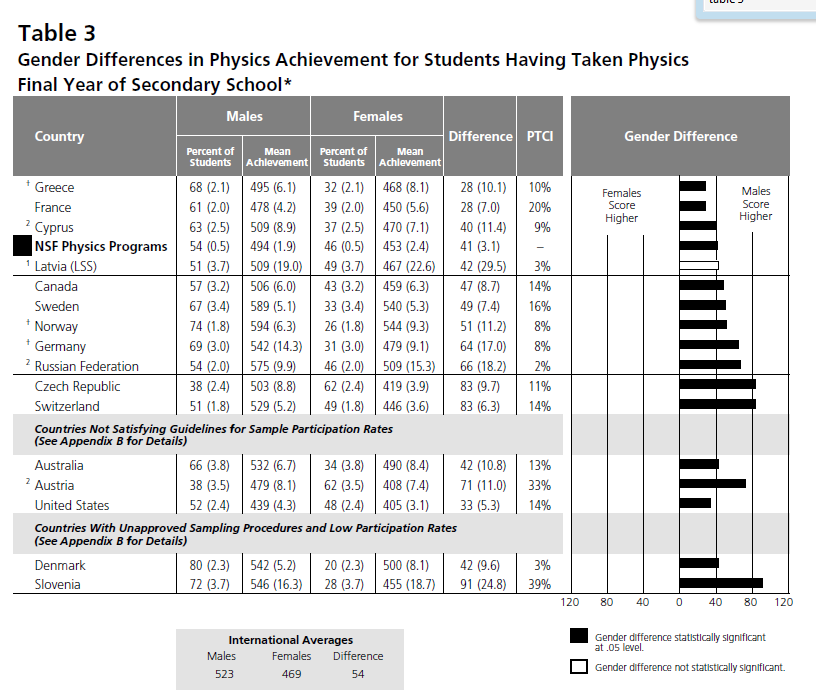 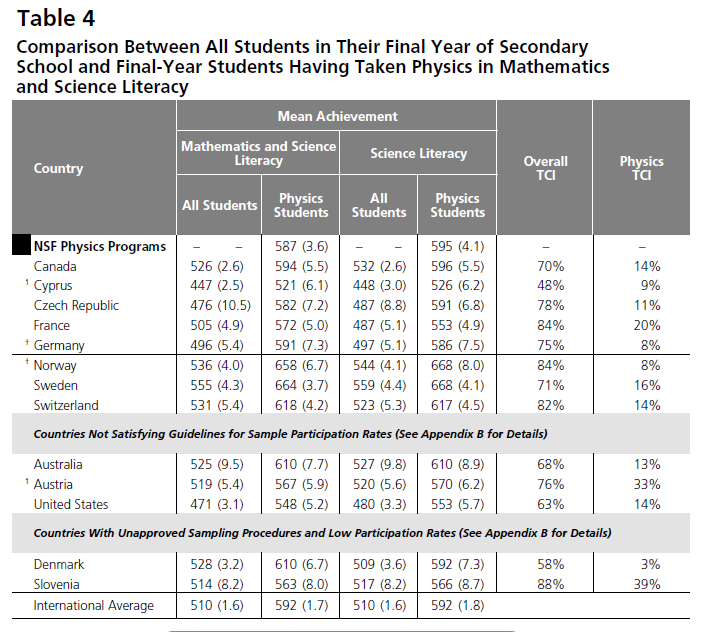 However, as low as it is, a score of 587 in "mathematics and science literacy" and 595 in "science literacy" is proof that the NSF physics students HAVE been taught the subjects, DO understand the terms, and SHOULD have been able to apply the principles to solving physics problems like those on "electricity and magnetism" where NSF physics students scored only 446, lower than any other country whose students took a physics course.   It's significant that in this age of the semiconductor, sudents in Sweden score 124 points higher, in Norway 119 points higher, and in war-torn Slovenia 63 points higher (while our top NSF female physics student scores another 20 points lower).

The NSF could raise its average physics score by 26 points simply by eliminating almost half (42%) of the students from the program who evidently study endlessly but never are able to learn.  If these half were replaced by Swedish students (two thirds of whom take less than 3 hours per week of physics instruction but score 579), not only would they raise their average score by 55 points (plus 26 points), but they would eliminate many frustrated teachers.

In relation to the amount of physics homework assigned to students, the lowest scoring NSF student is one who is assigned homework once or twice a week and scores 455, a score 8 points lower than a Canadian student and equivalent to a Swiss student who is not even taking physics. 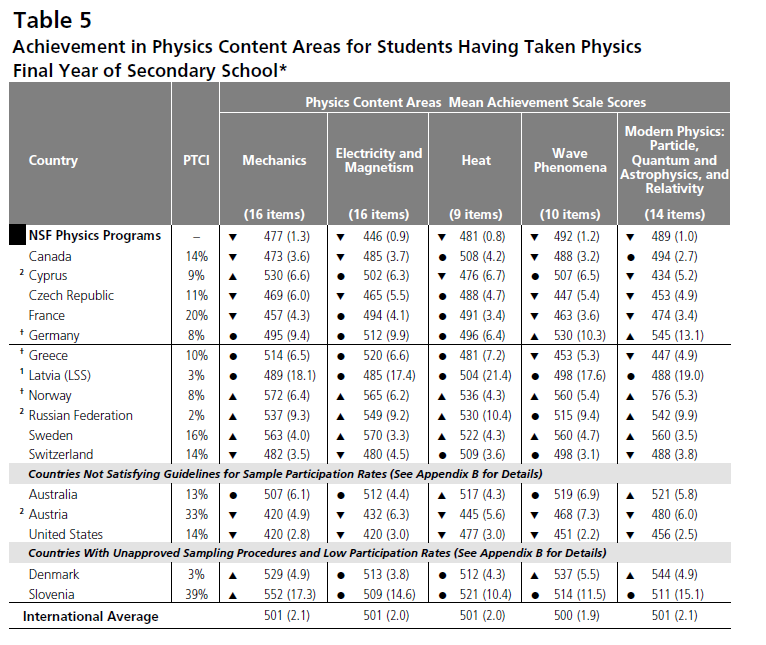 Not only was the US score very low, but we were one of the Countries Not Satisfying Guidelines for Sample Participation Rates (See Appendix B for Details), evidently because we were unable to test 85% of our 12th graders as TIMSS requires.  Had we done that, our 12th grade girls’ low physics score of 405 would have been even lower, perhaps even lower than 360.

“Although countries tried very hard to meet the TIMSS sampling requirements, many

of them encountered resistance from schools, teachers, and students, and thus did

not have the participation rates – 85% or higher for schools and for students both,

or a combined rate of 75% – specified in the TIMSS guidelines. Obtaining a high

participation rate for secondary school students is particularly challenging when

participation is voluntary, because these students have many demands on their time.

Also, their educational situations may make testing difficult; for example, in some

shown in the second category in Table 1.1 followed procedures but were unable to

meet the TIMSS guidelines for sample participation. Beyond the difficulty of encouraging

students to attend the testing sessions, the five countries in the remaining two

for sampling schools or students within schools, usually because of the organization

of the education system. Because Israel did not clearly document its procedures for

sampling schools, its achievement results (unweighted) are presented in Appendix

D. Appendix B includes a full discussion of the sampling procedures and outcomes

NSF Materials Challenge Urban Students, but the Decision to Use Them Is a Local One

Students who might not be expected to perform well in mathematics are beating the odds in the Philadelphia public schools -- passing challenging courses at rates 20 to 30 percent higher than their peers -- using materials developed with support from the National Science Foundation (NSF).

The successes are particularly striking at Ben Franklin High School, a typical inner city school where 62 percent of the 9th grade students enrolled in the Interactive Mathematics Program (IMP) passed math. The passing rate for students in traditional math courses hovers at 40 percent. Nearly 84 percent of the IMP students passed science as compared to 52 percent of other students.

Luther S. Williams, the head of NSF's education and human resources directorate, said the IMP results prove that the U.S. can achieve the national education goal of global preeminence in math and science despite U.S. students' middling performance on the Third International Mathematics and Science Study (TIMSS).

A variety of education reform projects supported by the NSF, he pointed out, include a body of materials to effectively teach sophisticated math and science to students at all grade levels, regardless of their race or economic background.

But, Williams added, the IMP findings also confirm NSF's belief that effective education reform--based on national standards for math and science teaching--requires a national consensus on the goals of math and science education. NSF also believes that the U.S. educational system is a uniquely decentralized one when compared to other nations in the TIMSS study so the impetus to change must come from the state and local level.

"Simply put," Williams said, "the existence of exemplary and effective materials alone will not improve the odds of better practices and more learning by all students. The decision to use those materials rests with state and local educators."

The success of the IMP materials in Philadelphia is especially encouraging in light of the data contained in Pursuing Excellence, which reports that U.S. math teaching generally is devoid of challenging content. U.S. students perform at, rather than above, the international average in such mathematically dependent subjects as chemistry and physics.

Demonstrating a strong compatibility with the "best practices" of high-achieving nations in the TIMSS study, the IMP materials are designed to eliminate tracking, or the assignment of students to courses on the basis of perceived abilities. IMP materials change the way that math is taught so that in any given school year students may concurrently learn concepts from geometry, algebra, trigonometry, and discrete mathematics.

The IMP materials also develop a range of skills in various areas of math, including how to use math to communicate and how to use computers and graphing calculators--handheld devices put the calculating and graphical power of an early microcomputer into a student's hands--as mathematical tools.

Although designed primarily to improve math and science education, IMP instruction also appears to have a broader ripple effect on overall academic success, with 74 percent of the IMP students passing English, according to officials in Philadelphia, as compared with 52 percent of the students who take traditional math.

The National Science Foundation (NSF) is an independent federal agency that supports fundamental research and education across all fields of science and engineering. In fiscal year (FY) 2010, its budget is about $6.9 billion. NSF funds reach all 50 states through grants to nearly 2,000 universities and institutions. Each year, NSF receives over 45,000 competitive requests for funding, and makes over 11,500 new funding awards. NSF also awards over $400 million in professional and service contracts yearly.