INDIA AND CHINA ADD 1.4 BILLION MORE   PEOPLE IN HALF A CENTURY

The slowest growing countries were in Eastern Europe where growth was either flat or less than 10%.  The population of Russia actually decreased during some of those years.  Even Belgium, Italy, the UK, Portugal, Austria, and Denmark experienced growth  of less than 20% over this half century. The 1.75 fold increase in the US population (1.1% per year) was quite a bit higher than the 25% growth in Western Europe, but just the increase in the number of people in China and India was five times larger than our total population.

AFRICAN POPULATIONS INCREASED SEVEN FOLD IN HALF A CENTURY

Many of the fastest growing countries during this time were Arab and African countries.   The population of the United Arab Emirates increased 84 fold (8.1%/year), of Qatar 29 fold (6.5%/year), and of Kuwait 24 fold (5.8%/year).  The populations of Namibia, Benin, Nigeria, Liberia, Sudan, Senegal, Swaziland, Cote d'Ivoire, Togo, and French Guiana increased more than seven fold, or more than 4% per year.

POPULATION OF BLACKS IN AFRICA IN NEXT HALF CENTURY

EVEN WITH AIDS, WILL INCREASE ANOTHER 900 MILLION 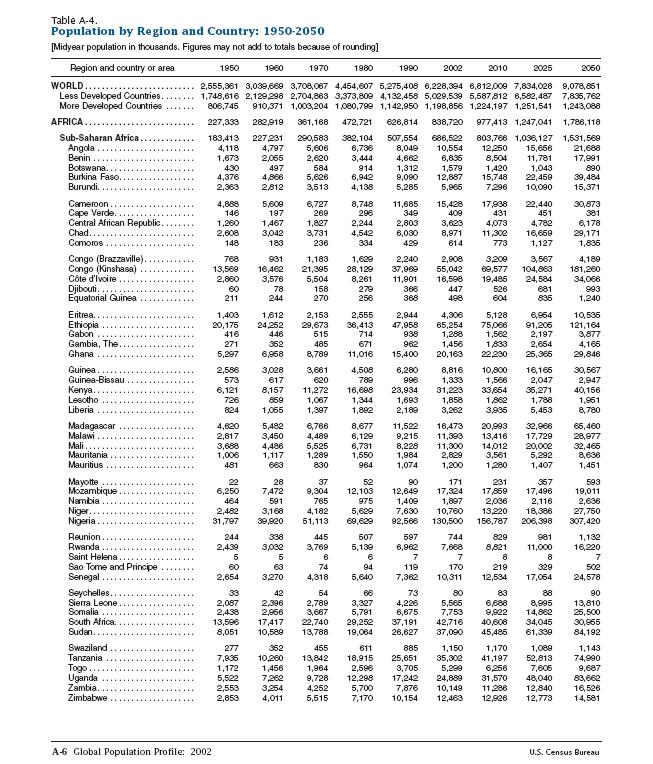 U.S. POPULATION GREW ONLY 1% PER YEAR

Twenty million of the 124 million increase in our population was due to immigration, so immigrants (many of them illegal aliens) accounted for 16% of our population growth.  Had it not been for them, the growth would have been only 68% (1%/year). If the world population were to continue to grow over the next two centuries at this U.S. natural growth rate, there would be 44.5 billion people in the world by the year 2200.  If if were to continue to grow at this rate for the next 4,000 years, there would be 1 x 10 to the 27th power (1 followed by 27 zeros) people in the world.  If it were to grow at the same rate as it's grown over the last 50 years, there would be 195 billion by the year 2200, and 8 x 10 to the 39th power (8 followed by 39 zeros) within 4,000 years.

Obviously most of this isn't going to happen.   Over the next two centuries, disease, famine, war, AIDS, cancer, other immunological diseases we haven't even heard of, and a whole host of other population control measures will prevent the world population from growing much larger than 200 billion.

The 2000 census showed the following breakdown of population by race:

According to this US Census Bureau survey:

To put this in terms that even a kikette can grasp, if you were in a room full of 100 people who were a representative cross section of our population, there would be:

1.       in a pure democracy, and if Whites were wolves and muds were sheep, we could vote to have muds for dinner and be done with it.

2.       In the unlikely event that latrino Whites voted on our side, we could pass a constitutional amendment to BANISH all muds from our shores.

3.       If we were to follow THEIR advice and “reduced [sic] this issue to a matter of brute force and empowerment”, we’d just pull out our machetes and our 280 million guns, and in ONE DAY, be a glorious all-White nigger-free civilization, once again.

If anyone thinks that’s not a PROBABILITY, think again, and research exactly what happened to the Whigs not that long ago who thought exactly the same thing.