Base Score in TIMSS Physics is 476

How can it be explained?

Our textbooks are intentionally full of errors and omissions?

Our teachers really are that bad?

Parents adversely influence the education process of their own children?

The exhaustive presence of the internet in schools?

Too much effort wasted to teach minorities?

Fluroide and chlorine in our water?

The score of 485 for our top 5% of physics students is only 9 points higher than the TIMSS Physics Base Score of 476 and almost 200 points lower than Sweden's top 5%. 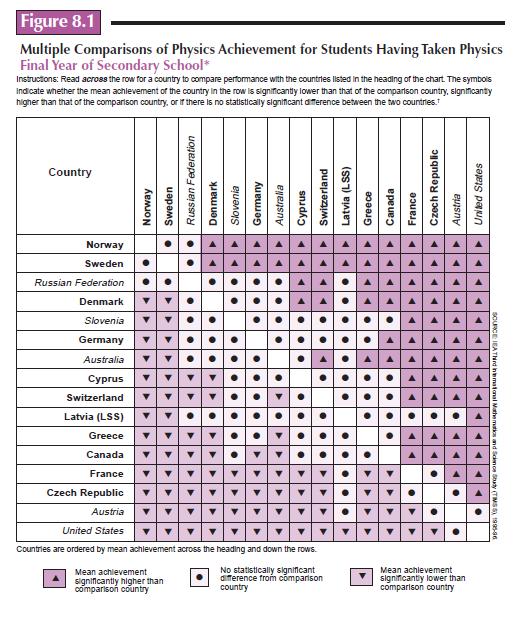 Girls in AP Physics Programs Score Lower than ALL Boys, and Girls of Sweden, Norway, and Russia

What can all of these other nations be doing right that NONE of our finest institutions and education methods and ingenious teaching tools and computer-laden laboratories can even begin to compete with their average student who simply takes one physics course?

So exactly what does a score of 453 represent?  Certainly not a researcher who's going to knock your socks off, much less develop something, much less understand the depths of their own ignorance.  What can be gained by giving them a computer?  If you said "nothing" you would have to ignore Table 12 which shows that giving students a computer in Canada reduced their physics achievement skills by 16 points, in Cyprus by 30 points, in Greece by 31 points, and in Latvia by 16 points.  Giving them a computer improves nothing and apparently just makes them worse physics students with a very high opinion of themselves.

Table 12 illustrates that in France, the US, Cyprus, NSF Physics Students, Latvia, Australia, Denmark, Canada, Sweden, and Norway, the TIMSS Physics scores of 12th grade boys increase 5 points for each 1 point increase in the gender gap (that is, the difference between boys' and girls' TIMSS physics scores): 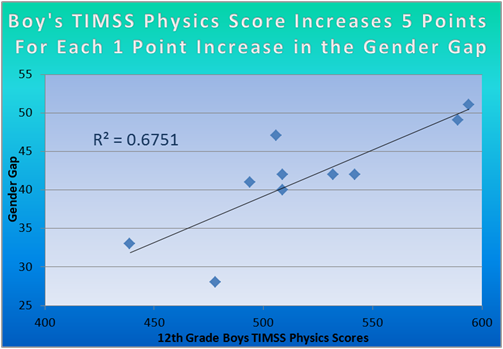 Scoring of the TIMSS test is similar to that for the SAT which consists of one essay question which can be scored only by subjective means, opening it up to controversy about whether or not it's valid or accurate. The most objective part of the test are the 225 five part multiple choice questions which attempt to measure the probability of a student succeeding in college or graduate school. About 1/4th of these questions can be answered strictly from rote memorization. For simplicity in the following analysis we include the three quarters of the test which require some form of reasoning or calculation which can be measured objectively.

Both tests have a base score of 200 which is assigned when a student signs their name. Of the 600 points between 200 and 800, another 150 points can be gained by knowing the subjects but not exhibiting any reasoning or critical thinking skills, for a total score thus far of 350. If a person were to just guess on the balance of the five part multiple choice questions without evaluating the answers in any way whatsoever, he would on average get 20% of them correct just by chance, for another 90 points and a total score of 440.

The base SAT Math score of 440 is conservative because in TIMSS physics which is scored similarly and which has questions of equal validity and depth, a score of 446 for American girls represents a score which is 30 points lower than the 476 they WOULD have scored had they just guessed on this part of the test.  A score of 476 is not indicative of any reasoning or critical thinking skills at all. These skills can be measured accurately only between 476 and 800.  And because many Asian students (more than 10% of them) score higher than 800, the SAT is also not a very accurate IQ test, particularly when American blacks consistently score lower than 431 in both SAT Verbal and SAT Math, lower than 391 in GRE Verbal, and lower than 416 in GRE Quantitative.

While the College Board does provide the standard deviation for black students in both SAT and GRE, scores this low most likely do not follow a normal Gaussian Distribution. For the average to be 431, there can't be too many students who score higher than this, because it's almost impossible to score lower than this, so their estimate that the standard deviation, say for black women who took GRE Verbal, is 88, is the most optimistic estimate.

Let's analyze this problem from a "liberal's perspective

This false, hypocritical statement summarizes what it is about "liberals" educated in the US public "school" system that makes them so ignorant of the world they live in and the life's philosophy of our Founding Forefathers who made this a once-great country.   The inability and unwillingness of "liberals" to grasp some of the most basic concepts can probably never be changed, no matter how much this nation spends for "education".  They are in fact living proof that doubling the cost of education from 4% to 8% of GDP is most likely a major reason SAT scores plunged 98 points, the US scored dead last in 17 of 34 TIMSS subjects, and American 12th grade girls scored lower on one third of the multiple choice questions than if they'd just guessed.

Is it even possible that there may be some truth to the statement:  "Indeed, we know that they do not ... guess randomly when faced with a test question they do not understand"?

No, there is not.   When American girls failed to correctly answer so many multiple choice questions, and when the test results show that they did not omit the question and did provide at least some kind of a response, then we know that they guessed at many of the answers.  Is it possible that their guesses were not random?

The only evidence that they didn't guess randomly on many questions is the fact that they scored lower on one third of the TIMSS physics questions than if they had just guessed randomly.  This means that there was some factor that influenced them to answer the questions wrong, so their answers cannot be considered to be random.  Whether this is because they were taught the wrong thing in the classroom (even though the boys sitting right next to them were taught the right thing), or because they believed the myth about "women's intuition" and decided to rely on this rather than answer the question based on what they were taught, is irrelevant.  The fact is that being so consistent in selecting the wrong answer on this third of the test is the only evidence we have that they didn't guess randomly.

On some questions there may have been a clue that caused them to select one answer over the other, so it could be argued that guesses on some other questions were also not random.  But when their responses were not statistically significant on almost a third of the test, or 32% of the questions, we know that at least ONE question didn't provide any clues like this, which would mean that the only way they were able to provide a response was to guess randomly, which makes this statement false.  It's highly likely that their responses to all 12 questions were based solely on random guesses, which means that we know that they DID "guess randomly", not that they did not.

Because their responses were lower than if they'd just guessed or were not statistically significant on 21 questions, the results of this 55% of the test cannot be used to assess their skills.

And still, only 14% of American women think men are more intelligent than women?  Where's their evidence?

Only 25% of girls correctly answered Item G01 PATH OF ELECTRONS TRAVELING THROUGH A MAGNETIC FIELD, which is exactly the percentage who would have answered correctly if they had just guessed at this 4 part multiple choice question.

Only 22% answered Item G04 RELATIONSHIP BETWEEN INDUCED CURRENT AND VARYING MAGNETIC FIELD, which is 3% fewer than would have answered correctly if they had just guessed at this 4 part question.

Only 20% correctly answered Item G05 DIRECTION REFRACTED RAY OF LIGHT, which is exactly the percent who would have answered it correctly if they had just guessed at this 5 part question.

Only 4% correctly answered Item G11 EFFECT OF ICE MELTING ON WATER LEVEL IN AQUARIUM, only 1% higher than the standard error of 3%.

Only 10% got Item H08 PATH OF ELECTRONS IN ELECTRIC FIELD correct, 10% less than if they just guessed.

Only 1% correctly answered H14 EFFECT OF DENSITY ON THE FREEZING OF WATER, which is 24% lower than if they just guessed. 1% (less than the 3% standard error) correctly answered the non-multiple choice question Item H17 RESISTANCE OF A SERIES CIRCUIT COMPONENT.

6% correctly answered Items H12 PARTICLE MOVEMENT IN A TRANSVERSE WAVE, and H15 DE BROGLIE WAVELGTH OF A MOBILE ELECTRON which are non-multiple choice questions which suggest that the level of understanding was just slightly higher than the standard error s12alm95.pdf

55% of American correctly answered Item G2, demonstrating that they were taught and were able to remember this basic physics principle:

When a small volume of water is boiled, a large volume of steam is produced. Why?

A. The molecules are further apart in steam than in water.

B. Water molecules expand when heated.

C. The change from water to steam causes the number of molecules to increase.

E. Water molecules repel each other when heated.

51% of American girls (vs. 48% of American boys) correctly answered Item G3, demonstrating that they were taught and were able to remember this basic physics principle:

A jar of oxygen gas and a jar of hydrogen gas are at the same temperature.

Which of the following has the same value for the molecules of both gases?

A. the average velocity

B. the average momentum

43% of American girls correctly answered Item G6, demonstrating that they were taught and were able to remember this basic physics principle:

By what process do most stars release energy?

B. Rapid rotation of the star

C. Radioactivity in the interior of the star

D. Nuclear fusion in the interior of the star

E. Heat which was stored when the star was ‘born’

42% of American girls correctly answered Item G12 DIRECTION OF FORCE DUE CURRENT, demonstrating that they were taught and were able to remember this basic physics principle.

42% of American girls (vs. 38% of American boys) correctly answered Item H01 BOXES SLIDING DOWN INCLINED PLANES demonstrating that they were taught and were able to remember this basic physics principle.

39% of American girls correctly answered Item H02 LIQUID EVAPORATION demonstrating that they were taught and were able to remember this basic physics principle:

A. the temperature in the air above the liquid decreases.

B. fast-moving liquid molecules near the surface escape to the air and the liquid gets warmer.

C. the gas pressure of the substance directly above the liquid depends only on the atmospheric pressure.

D. fast-moving liquid molecules near the surface escape to the air and the liquid gets colder.

35% of American girls (vs. 33% of American boys) correctly answered Item H05 LENGTH OF SPACESHIP IN FLIGHT demonstrating that they were taught and were able to remember this basic physics principle:

6% & 34% of American girls correctly answered Item H19A & B SPEED OF SOUND EXPERIMENT/ REASON demonstrating that they were taught and were able to remember this basic physics principle:

(a) Briefly outline an experiment Susan could do at her school, using echos on the playground wall to measure the speed of sound. Indicate what materials Susan would need, what measurements she will take, and what computations she will make.

(b) Four teams in Susan’s class did the experiment you described. Each team got a different answer. Explain one reason why this might happen.

A car moving at constant speed with a siren sounding comes towards you and then passes by.  Describe how the frequency of the sound you hear changes.